A downloadable game for Windows

In OBELUS, a bold robot battles three gargantuan alien monsters to protect the fate of a united earth.

Created as a school project in 2013, Obelus was our wish come true to make a traditional arcade game, but with newer technologies like terrain destruction and lots of visual polish.

The emphasis was on battles with huge bosses, as we pictured a David and Goliath-like battle would suit the difficult arcade vibe.

The downloadable version is from 2013, so by no means consider it a living project. The game was made by Tony Fial, Thomas Jager, Freek Verheijde and Harm-Jan Wiechers.

First off, my computer assured me I was downloading a virus, but let me say it now: this is not a virus. It's great and worth downloading, so don't be afraid to give it a shot.

Second, this game's pretty good. I'm a sucker for boss fights,  particularly against really big and overwhelming enemies, so if you're the kind of guy that likes to take on massive bosses in games and doesn't like all those little enemies, you'll like this game.

Third, the style and music is great. The little touches that make it look like a damaged tape are great too.

Of course, no game is free from problems. My biggest problem is the fact that you can't scroll through levels. I say you should have two modes, a score attack mode, which is basically what we have now, and a practice mode, where you can skip to any boss you've seen before and tackle it without points or anything like that. But as it stands, it's pretty annoying to have to restart every single time.

The guns have a small problem in my book with how they work, particularly the scatter gun. Sometimes, especially at the beginning when you're still learning, you pick up a gun you really don't need or want at the moment. You should be able to switch between them, maybe with the Q and E keys?

I think you could work on your player communication though. It didn't take me long to figure out what to do with the second boss... but only because I accidentally kept shooting the floor xD Maybe on a game over you can have the scientists reviewing the tapes and they give tips to the player for next time?

If you wanted to keep expanding on this game, LAN based multiplayer and different difficulty levels would be amazing, as well as hunting down and murdering the terrain glitches with the third boss. I found a bunch xD

Thanks, communication is the main reason why we mention it's 5 years old, haha. We would definitely telegraph more and communicate better where bosses can be hurt, if we had to do it again. It's also worth noting that Score Attack is the only mode because we made it for a physical arcade cabinet, so it wasn't really meant for a digital release back then :)

So I really loved the simplicity and speed of the gameplay, the visuals and audio. But the game, for me at least, falls a little flat in its communication. The first boss was easy enough to figure out, and the lives system was in no way prohibitive to learning the boss.

However the second boss was my last due to these factors. It took me a while to figure out that, first, you needed to hurt the tail, and I lost a few lives trying to figure out how to get the weapons below me. But I still have no clue what to do with the second stage. Due to the time it takes to not only kill the first boss, dispatch of the first stage and have another attempt at stage two I was extremely discouraged from continuing attempts. I get that the lives mode lends some overall tension to the fights, but it's my opinion that the bosses should be more a test of skill in doing and avoiding damage than it should be trying to figure it out and the lives system multiplied this issue for me.

Overall, for a five year old project, it holds up quite well and if I hadn't been told that, I'd have guessed it was new.

Thanks! Your voice-over was very fun to hear! And yep, if we would redo it, we would definitely focus on communication about where to hurt the bosses; most people jump off the building. 😅 We're glad you enjoyed it, though! 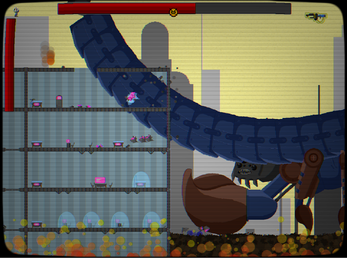 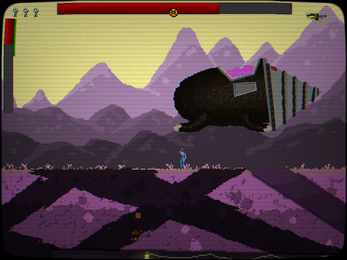 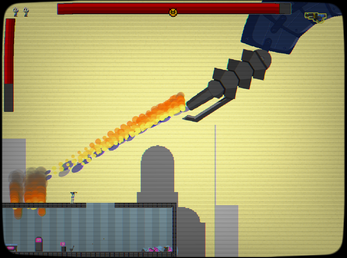